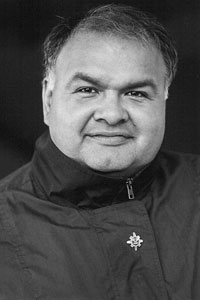 BILLINGS, Mont., January 30, 2020 – Rocky Mountain College will host actor Gary Farmer in its third installment of the Presidential Lecture Series. Farmer will present “A 20th Century Indian: Perspectives on Life and Art” on Tuesday, Feb. 18, at 5 p.m. in the Great Room of Prescott Hall on the Rocky Mountain College campus. The public is welcome to attend the event.

Farmer, born in Ohsweken on the Six Nations Reservation along the Grand River of the Iroquois Confederacy in Ontario, Canada, studied photography and film at Syracuse University and Ryerson Polytechnic University. Over the last 25 years, Farmer has portrayed over 100 roles in independent and mainstream film and television. A pioneer in the development of First Nations media in Canada, Farmer is the founding director of Aboriginal Voices Radio, founding editor-in-chief of the Aboriginal Voices magazine, and previously led the Aboriginal Voices Festival.

Farmer is best known for his role as spiritual Native American guide Nobody in “Dead Man” (1995). Other key roles have included Arnold Joseph in “Smoke Signals” (1998) and Philbert in “Powwow Highway” (1989), which became a milestone in Native film.

As a filmmaker, Farmer has directed projects including an episode of the “Forever Knight” television series (1992) and an episode of “Father Figure” (1992). Farmer also formed the blues band Gary Farmer and the Troublemakers who have released two albums, “Love Songs and Other Issues” (2007) and “Lovesick Blues” (2009). Farmer recently completed the film shoot "Cowboys” in Montana and he is currently working on the NBC Universal series "Resident Alien” which will debut on the SYFY Network this summer.

"Rocky Mountain College’s Native American Outreach is so proud to bring Gary Farmer to Billings. We think it is vital for our Native students to fellowship with Native leaders in every field. Mr. Farmer is an iconic Indigenous actor, musician, and advocate for Indian Country. To be able to share his talent and wisdom with our students and the Billings community is a pleasure,” said Rocky Mountain College Native American Outreach Director, Misty Kuhl.

During Farmer’s visit to Billings, Rocky Mountain College Native American Outreach will host a screening of his film “Dead Man” at the Babcock Theatre on Monday, Feb. 17, at 7 p.m. Attendees will enjoy a special Q&A session with Farmer after the film. Tickets are $8 per person. Gary Farmer and the Troublemakers will also play blues and rock at Craft Local on Wednesday, Feb. 19, at 6 p.m. This event is free and open to the public.