Aviation at Rocky Mountain College has a long and rich tradition.

The first documented connection between aviation and the College was in 1931 when several faculty members' children living on campus built a replica of Charles Lindbergh's famous "Spirit of St. Louis" airplane from scrap lumber (pictured below). Charles Lindbergh had lived in Billings in the mid-1920s while working as an airplane mechanic and applicator of dope to the fabric wings of aircraft at the Billings Airport, located, even then, just above campus on the Rimrocks. He also performed as a wing walker in an airshow at the fairgrounds where MetraPark is today. Once, he teased the crowd by walking on the wing, climbing back into the cockpit as the pilot backed away from the crowd, and then threw a dummy out of the plane to make the crowd think he had fallen. He maintained an affection for Montana in later years and returned here on a good-will tour shortly after his famous solo flight across the Atlantic.

In the photo below are brothers Wayne and Leighton Gustafson triumphantly sitting on the wing of the replica of the "Spirit of St. Louis." Their father was a professor of agriculture. Wayne is a World War II Navy veteran and served many years on the Board of Trustees at Rocky Mountain College and as an adjunct professor. He retired from a career as an architect, and in 2012, he helped design the remodel of Aviation Hall. In the background is the original college gym. 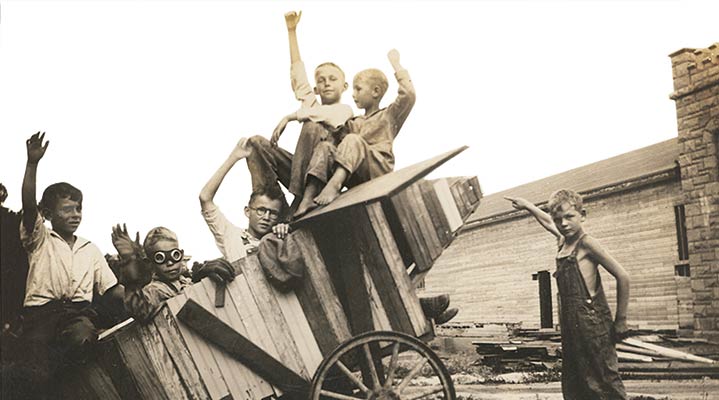 In the late 1930s the College started a degree program in aeronautics as part of the Technology and Opportunity School. In 1939, the U.S. Congress passed the Civilian Pilot Training Act, which provided federal funds for colleges to train pilots in the event the country went to war. The College signed a contract with the Civil Aeronautics Administration to train up to 30 pilots each quarter. Students received 21 college credits by taking 215 hours of ground school classes, including topics in aerodynamics, power plants, meteorology, navigation and radios, and by flying up to 50 hours, earning the private pilot certificate. The college received $60 for each student who completed the program. By the time the war began, 161 students had completed the program and 46 were in the Navy or Army Air Corps.

One graduate from 1941 was Donald Germeraad who was a Navy pilot during the war and went on to a very successful career as a test pilot and engineer for Convair Aircraft Corporation and the space program. He was the first person to fly four different aircraft for Convair, and as an engineer, he helped design the fuel tanks for the space shuttle program. The Flight Simulator Training Center is named after him.

After the war, Rocky Mountain College developed mechanics courses and used a surplus Naval fighter, the Grumman F-4F Wildcat, which biology professor Charles Buck landed on campus in 1945. It remained on campus for several years. 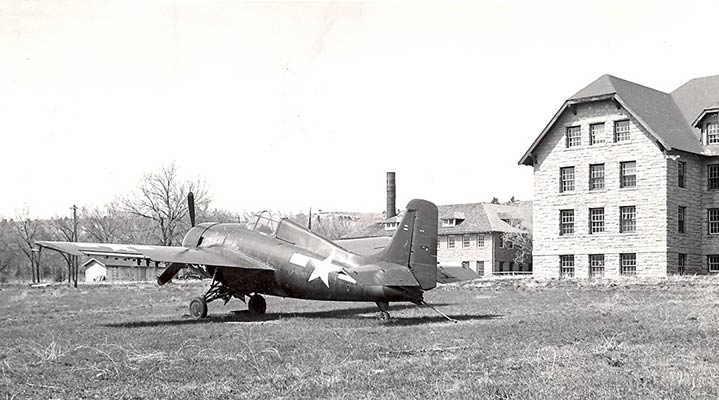 In 1963, Professor Buck and a group of students formed a club called "The Flying Bears." The club rented planes from Lynch Flying Service (now Edwards Jet Center) at the Billings Airport. In 1966, history professor Dr. Nathan Shiverick (B.A., M.A., and Ph.D. from Harvard University) became the advisor to The Flying Bears, and they won the American Airlines Safety Award at a national flight competition in New Rockford, Ill. Jerry Bust, the Flying Bear's instructor, went on to a long career as a pilot for United Airlines. Other Flying Bears included John Peikert who later flew Boeing 747s for Northwest Airlines; Paul Christianson who flew 767s for United Airlines; Jack Riffy who became a bush pilot in Alaska; Tommy Thompson who became the chief pilot for Big Sky Airlines; and Jim Almond, a successful banker/rancher who was chairman of the Board of Trustees of Rocky Mountain College from 2005 to 2007. RMC also had a parachuting club in the 1970s called "The Para-Bears."

The aviation program as it exists today began in 1988 when the College expanded to include more professional programs. The College has been a member of the University Aviation Association (UAA) since the inception of the program. Initially, there was one major, aviation studies; in 1990, the program added a major in airway science with oversight from both the FAA and the UAA. After a couple of name changes, in 1999 the two majors were renamed aeronautical science and aviation management, as they remain today.

For 14 years, flight training was conducted at the Billings Airport under contracts with Corporate Air and Lynch Flying Service/Edwards Jet Center. In 2002, the College purchased a fleet of aircraft and opened Flight Operations at the Laurel Airport. In the summer of 2007, Flight Operations moved back to Billings in a hangar now owned by the College.

The program has been a member of the Aviation Accreditation Board International (AABI) since 1997. Both majors were accredited by AABI in 2009. Recent graduates have successful careers across the aviation industry as pilots for numerous airlines, corporations, cargo companies, hospitals, all branches of the military, companies in Alaska, and missions organizations, as well as in management positions at numerous airlines, airports, and various aviation companies.