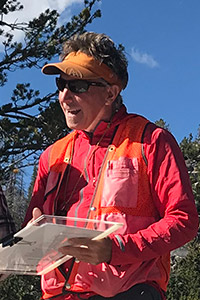 As a native of the northern Rockies, Dr. Kalakay grew up with an innate interest in the mountains and landscapes that surrounded him. He spent much of his youth and early adult years exploring mountainous regions of the western U.S. by climbing, skiing and long distance trail running. Until the age of 29, Dr. Kalakay worked in the construction industry on projects ranging from custom homes to nuclear power plants.

As a late-comer, non-traditional student at Montana State University-Bozeman, he was immediately drawn to the field of geology and from his first class he never looked back. Dr. Kalakay went on to the University of Wyoming where he completed a master’s degree and a Ph.D. In his master’s thesis Dr. Kalakay spent three field mapping seasons studying the tectonic and magmatic evolution of the fairly famous Ivrea Zone in the Italian Alps. In his Ph.D. he studied the interplay between arc magmatism and development of the Late Cretaceous fold and thrust belt in western Montana. After completion of his Ph.D., Dr. Kalakay held teaching positions at Montana State University-Bozeman and Vanderbilt University in Nashville, Tennessee. He currently teaches as a summer adjunct for the University ofg Houston Geology Field Camp. He has been at Rocky Mountain College since Fall 2004, where he is happy teaching in his familiar Rocky Mountain homeland.

Dr. Kalakay’s research interests center on the thermal evolution and physical construction of continental crust. This research emphasizes the role of magmatism during structural growth and eventual collapse of mountain belts, such as the Montana Rockies or the Italian Alps. Field mapping and structural analyses serve as the fundamental framework for all of his studies. His research projects also require expertise in igneous petrology, metamorphic petrology, thermochronology, and reflection seismology. He has many ongoing research projects that include: studying a large-scale shear zone in the Beartooth Range that likely represents an Archean age continental collision, mapping a unique suite of “leopard dikes” that served as the feeder system to the famous Stillwater complex, studying crustal collapse mechanisms in the Anaconda metamorphic core complex of western Montana, and the relationship between sedimentation and tectonics in the Sevier thrust belt of Montana. All of his current research involves spending time in the mountains of Montana. Dr. Kalakay’s motto: If it’s not a beautiful place to work, I’m not going there!