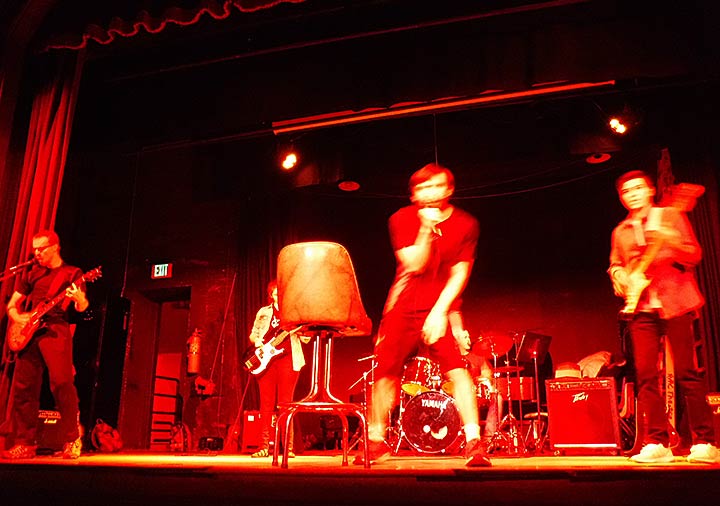 Have you thought of joining a rock band, but for one reason or another (lack of gear, lack of experience, lack of confidence?) couldn't make it happen? Consider joining the RMC Rock Band! It's open to all students of any experience level, and instruments are provided — all with no lab fees!

Many students ask some version of the following questions regarding Rock Band.

Are there scholarships available for Rock Band?

Absolutely! Just this year we've added Rock Band to the list of ensembles in which students can audition for scholarships.

I'm new to rock and its performance. Do I have a chance of making it into Rock Band and being successful?

Again, absolutely. We are open to all students of all skill levels. In fact, the purpose of the band, aside from having an awesome time playing rock, is to develop student personalities and musical abilities.

I don't have any instruments. Is this a problem?

Not at all. We have almost a complete rock band's worth of equipment for student use, and what we don't have we can work toward getting.

What if someone with my same instrument and skill set joins too?

No problem. One main purpose to the band is to encourage students to push beyond their existing experience, to varying styles of course, but also to other instruments.

How large is the group?

Right now, there are twelve spots, theoretically to have two bands of the typical 5–6 member size. However, with enough student interest, the amount of spots can increase accordingly.

If I join, what is expected of me, and how are grades calculated?

All Rock Band members are expected to participate in the weekly rehearsal (sometimes more than once per week, if a performance approaches) and intermittent performances, to continually improve at their instrument(s), and to break through psychological barriers associated with performance. Grades are calculated according to attendance, effort, and demonstrable improvement.

Rehearsal, which takes place in the Rocky band room, is professional but very laid back, much more so than a typical classroom. It could be said that it maintains the positive professional aspects of a classroom, but is adjusted to a rock/pop atmosphere.

What kinds of songs does Rock Band play, and how are they chosen?

Rock Band plays primarily cover songs of any style, but I'm always encouraging students to experiment in writing their own music. Song choice has been an issue, given that we all come from different stylistic backgrounds (where most real bands assemble based on a particular style). But we use a democratic process wherein each member makes a list and the rest of the band votes for one song on each member's list. Playing music outside of one's wheel house is more or less unavoidable, but then again, that's what is required for personal and musical development.

Can students who are interested in joining attend rehearsal before enrolling?

Yes. In fact I encourage it. We meet Wednesday evenings at 7pm in the Losekamp band room. The end time varies, but rehearsal usually runs until sometime between 9:00 and 9:30 p.m. If you'd like to attend a rehearsal, please email Jim Bungert at jim.bungert@rocky.edu

Concerts, which serve as the course's "exams," have been fairly short (less than an hour) and have comprised one set of cover songs — so far between six and nine songs. Concerts on campus are a bit more formal, with the band on stage, and the audience sitting (hopefully standing!) in the auditorium. We also play out in the community, usually at bars. These gigs have been very laid back, informal, and surprising in terms of how reality (the often monotonous tasks of moving gear and waiting to play) doesn't always match up with expectation (what college students often think of when they think of a bar situation). This is to say that gigs in the community might sound scary, but they are designed both to put students out there in public and to demonstrate just how much work (and waiting) is involved in public gigs.

Does the band travel outside of Billings for gigs? Not yet, but it is a definite possibility.

We hope to see you next semester! 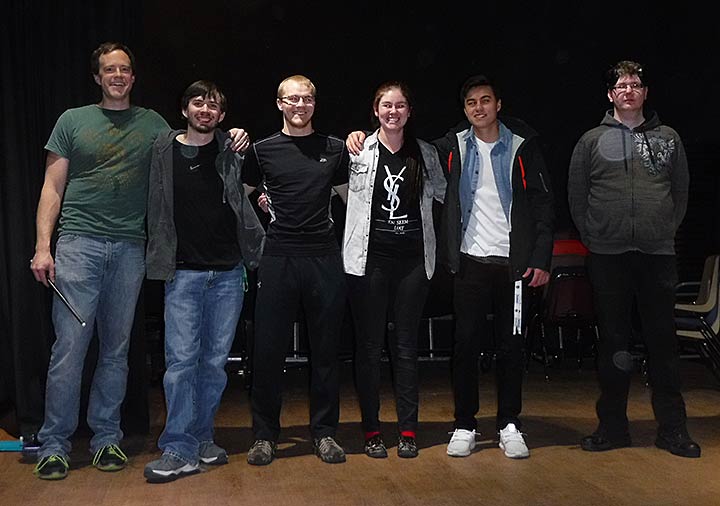