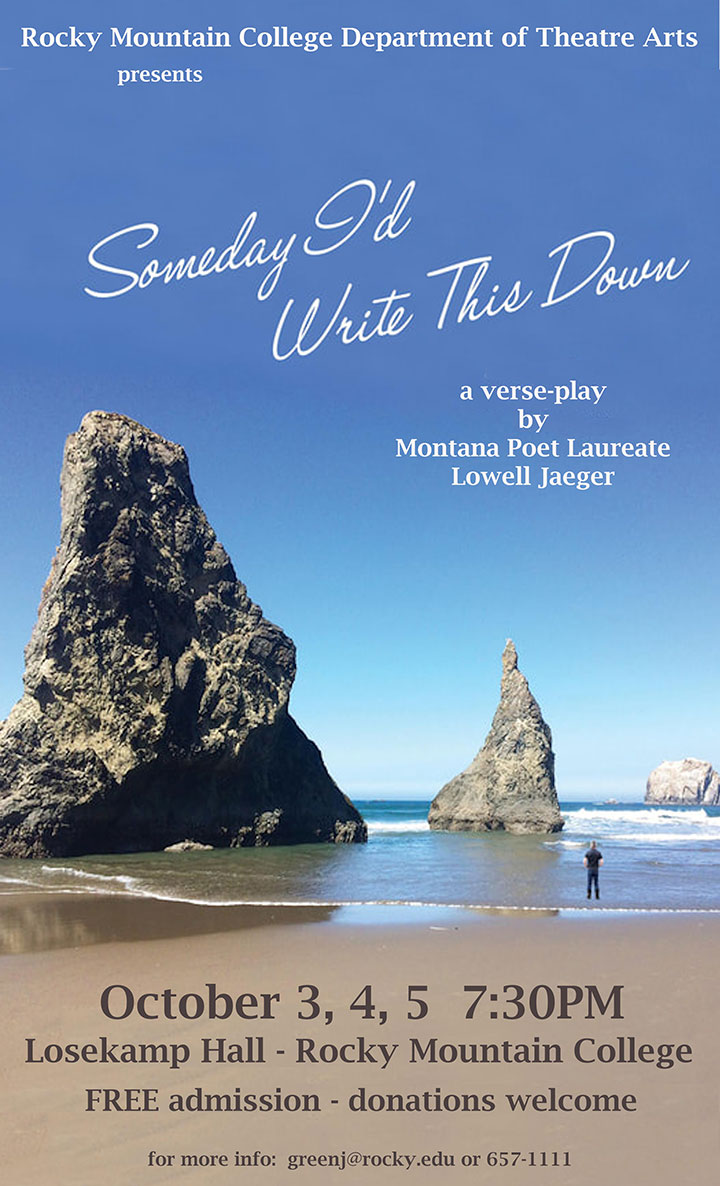 Someday I’d Write This Down

Someday I’d Write This Down is an original verse-play written by Montana’s Poet Laureate, Lowell Jaeger. The play weaves stories of family, love, loss, hardship and triumph in an effort to increase the accessibility of poetry in a variety of learning styles. Whether you are a lover of listening to the imagery of poetic writing or admirer of visual performance, Someday… has something for you.

The play is being produced by the Rocky Mountain College Department of Theatre Arts and will be performed October 3, 4, and 5 at 7:30 p.m. each night in Taylor Auditorium of Losekamp Hall on Rocky’s campus. The performances are free to attend and donations are heartily welcomed to help support arts education.

Someday I’d Write This Down tells stories of growing up in a small Midwestern town during the Cold War of the 1950s and 60s. The main character is an aging man who is remembering and reflecting on the events of his life over six decades. Each scene traces an aspect of this man’s cognitive and spiritual progression toward understanding himself, his family and the general human condition. The production has its serious moments but delves into the humorous side of life as well.

Lowell Jaeger teaches creative writing at Flathead Valley Community College in Kalispell, Montana. He is author of six collections of poems: War On War  (Utah State University Press, 1988), Hope Against Hope (Utah State University Press 1990), Suddenly Out of a Long Sleep (Arctos Press, 2009), WE (Main Street Rag Publishing, 2010), How Quickly What's Passing Goes Past (Grayson Books, 2013) and Driving the Back Road Home (Shabda Press, 2015). He is founding editor of Many Voices Press and recently edited New Poets of the American West, an anthology of poets from western states. He is a graduate of the Iowa Writer’s Workshop, winner of the Grolier Poetry Peace Prize, and recipient of fellowships from the National Endowment for the Arts and the Montana Arts Council. In 2010, Jaeger was awarded the Montana Governor’s Humanities Award for his work in promoting civil civic discourse.