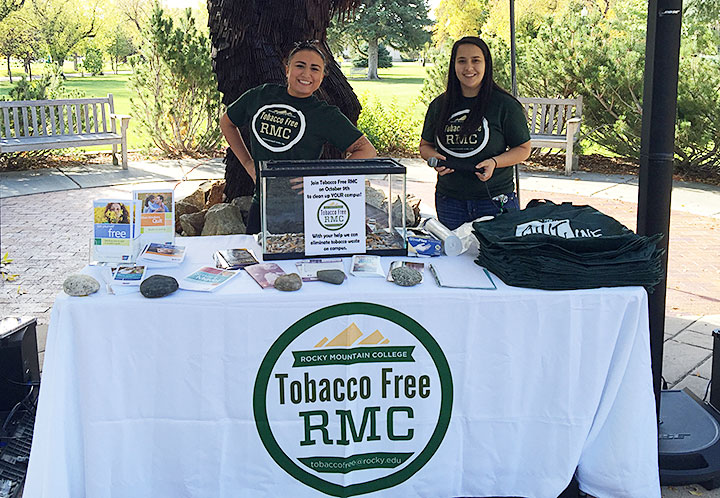 The Surgeon General has determined tobacco use and secondhand smoke causes significant health hazards and preventable disease. As noted by the 2009 Montana legislature (Montana Code 50‐40‐102) the “right to breathe smoke‐free air has priority over the desire to smoke.” Rocky Mountain College is committed to providing a safe and healthy environment free from tobacco use for its students, employees, and visitors.

1. Provides a healthy and safe environment free from tobacco;

3. Eliminates litter/waste associated with tobacco use; 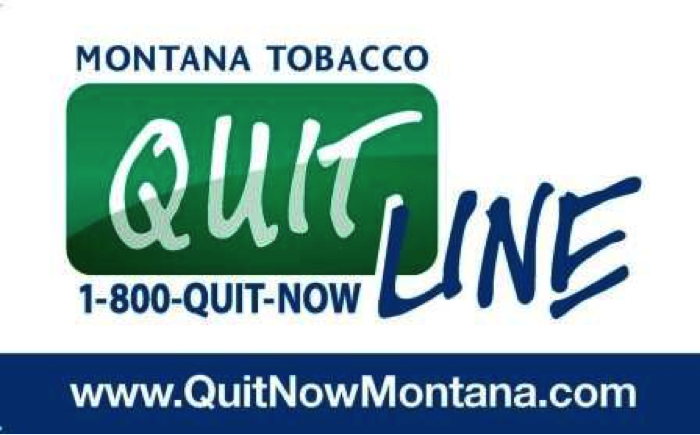 Why is RMC tobacco free?

RMC is concerned about the health of all students on campus, tobacco users and non-tobacco users, that’s why we have decided to join the Montana Collegiate Tobacco Prevention Initiative (MCTPI). We want to promote cessation and a cleaner living, learning, and working environment.

What is the Montana Collegiate Tobacco Prevention Initiative (MCTPI)?

Montana Collegiate Tobacco Prevention Initiative (MCTPI), led by The BACCHUS Initiatives of NASPA, is Montana’s young adult movement to create healthier college campuses in Montana by reducing tobacco use and exposure. Training and technical assistance helps campuses create a safe environment through year-round comprehensive education and prevention activities, cessation services and policy change. Each campus movement is led by an advisor and a group of dedicated students and is assisted by a tobacco task force. Funded by the Montana Tobacco Use Prevention Program and staffed by The BACCHUS Initiatives of NASPA, MCTPI has thirteen participating Montana Campuses including:

Why Have A Collegiate Tobacco Control Movement?

Campus health education of the past has not identified tobacco education and prevention as a high priority. However, the 18-24 year old age group continues to have the highest smoking rate among all adults. We know that a quarter of students begin using tobacco or increase their use while in college and that most students who use tobacco want to quit before they graduate. In addition, this age group is heavily targeted by the tobacco industry on campus with student groups (i.e. Rodeo club, fraternities and sororities), in local publications, bars/clubs, social events and concerts. There are additional challenges associated with the changing landscape of smokeless tobacco options, including e cigarettes and snuff. The goals of MCTPI will help to address these high-risk tobacco issues in the Montana collegiate population.

What are the Goals and Outcomes of the Montana Collegiate Tobacco Prevention Initiative (MCTPI)?

How can you take away my right to smoke?

Individuals who smoke do represent a minority group in terms of numbers; smokers do not make up the majority of our world, the United States, or any college campus in the U.S. However, "smokers" are not a category protected under the Equal Protection Clause of the Constitution. Likewise, smoking is not a protected liberty right under the Due Process Clause of the Constitution. Suggesting that individuals who make a choice to smoke are an oppressed minority group is not only an uneducated argument, but can be extremely offensive to truly oppressed, underrepresented and underserved groups, such as students of color. Tobacco use is a choice.

Why not just ban smoking tobacco, as opposed to smoke-free tobacco that just affects the person?

Using tobacco, in any form is a personal choice. A tobacco‐free policy would not eliminate a person’s choice to use tobacco products; individuals simply would not be permitted to use these products on campus where their personal choice negatively impacts the health of all people around them. We agree that tobacco smoke poses the greatest threat to those exposed; however we also know that a tobacco‐free policy is simply the strongest policy.

Why not address other major health issues facing college students?

Tobacco-free policy work is not intended to distract from other health issues. RMC encourages everyone to work on a variety of health and safety issues impacting students on our campus.

So why focus on tobacco?

Tobacco use is an extremely important health crisis that has been largely ignored in the U.S. due to the chokehold of the tobacco industry (a.k.a. Big Tobacco). Tobacco-related death is the most preventable cause of mortality. Each year, over 400,000 people die in the U.S. from tobacco-related causes. Tobacco use accounts for more annual deaths than suicide, murder, HIV/AIDS, alcohol use, illegal drug use and motor vehicle injuries combined. Tobacco use and secondhand smoke are major health issues and can be influenced directly through policies promoting tobacco-free environments. Not only is this a major issue, but also, unlike many other health issues, one person's choice to use tobacco directly affects the health of others on a daily basis.

There are so many other pollutants in the air from cars, homes, landscaping machinery, and power plants – who cares about secondhand smoke? We can’t eliminate all pollution, so why bother?

This is true! Just because we can’t solve every problem doesn’t mean we shouldn’t solve the problems we can fix. Even with a tobacco-free policy, there would still be some forms of pollution in the air. But we know that secondhand smoke kills 50,000 Americans every year, and saving these lives through tobacco-free policies is well worth it.

Why not just enforce the former ‘perimeter policy’ of 50 feet?

Yes. The policy prohibits all forms of tobacco and nicotine delivery devices, even those not regulated and approved by the FDA. This is the same throughout the nation.

Is there a designated smoking area on campus?

No. The use of tobacco will be prohibited on all campus grounds. Smoking zones and perimeter policies have not been found to be effective (or enforceable) and smoking shelters are expensive to construct and maintain. Campuses with full tobacco-free policies have reported fewer problems with compliance than policies that include smoking areas.

Initially, there will be an emphasis on education as the campus and community adapt to the policy. Violators will receive a friendly reminder, along with cessation information. Repeat or problem violations will be handled like any other conduct issue on campus: either through the Dean of Student’s office or the employee’s department. A recent study of tobacco-free campuses found that most campus members respect the policy once they are informed. Serious enforcement problems are infrequent and are managed by campus officials.

How can I report a violation?

The policy will best be enforced by everyone taking an active role in informing people that a tobacco-free policy in is effect. If you would like to alert the RMC Tobacco Free Task Force regarding general policy violations, areas of high non-compliance, or trouble spots on campus, please contact the RMC Tobacco Free Task Force at TobaccoFree@rocky.edu.

How can I or someone I know quit?

Tobacco-free policies have been shown to encourage people to quit. These policies also support those who are trying to quit. Free quit-kits are available from the Tobacco Free RMC task force. The Montana Quitline (1-800-QUIT-NOW (1-800-784-8669)) provides individual coaching and free or low-cost cessation support, including nicotine replacement therapies and prescription drugs. For more information on campus and community cessation support, visit http://www.montana.edu/oha/tobaccofree/.

If I want to help tobacco-free efforts on campus, who should I contact?

Tobacco Free RMC is a task force and an active student group working to prevent tobacco use on campus and support cessation. Contact us at TobaccoFree@rocky.edu.

Who is affected by the tobacco free campus policy?

The Tobacco Free RMC policy applies to all persons in or on property owned, leased, or used for specific events by the College or any of its components.

What about athletic events or other events on campus?

All College events on or off campus, including home football games, will be tobacco free events.

back to top
Join Our Team 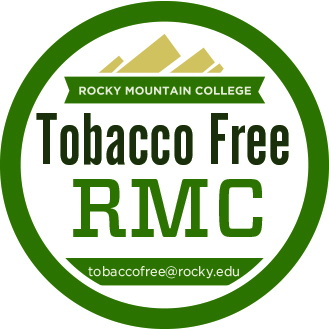